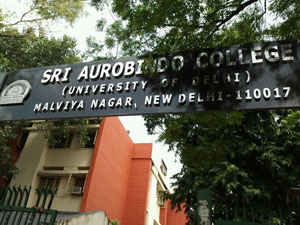 Sri Aurobindo College was established in 1972, the birth centenary of the philosopher, patriot- poet, Sri Aurobindo as a constituent college of the University of Delhi. The college inculcates the ideals of Sri Aurobindo and believes that an active commitment towards excellence is fundamental to the process of education

The College has seen remarkable growth over the years. The University results have shown a progressive improvement. Continual addition and updation of essential amenities and facilities has made our college a prestigious institution for academic and co-curricular pursuits. Student engagements in extra curricular activities like Sports, NCC and cultural societies are encouraged under the able guidance of our skilled faculty. Our commitment is to a student- centered environment and the college is dedicated to education covering a broad spectrum.

In 1893, Aurobindo Ghose, returned to India, and became the Vice-principal of the State college in Baroda. He drew a salary of Rs.750/-. He was held in great respect by the Maharaja of Baroda. Aurobindo was an accomplished scholar in Greek and Latin. From 1893 to 1906 he extensively studied Sanskrit, Bengali literature, Philosophy and Political Science.

The College has always been known for its highly qualified academicians as faculty. Today our peer alumni teachers are serving as principals in other DU colleges, professors at several DU departments. The alumni students are well placed in fields of banking, finance, general management, academics and entrepreneurship and have been performing remarkably well in all spheres of life.

The College has completed 44 glorious years. The College owes it glory to the sincere dedication of the staff, both teaching and non-teaching, tens of thousands of young persons who have passed out of our portals and the goodwill from all our well wishers and the community at large. 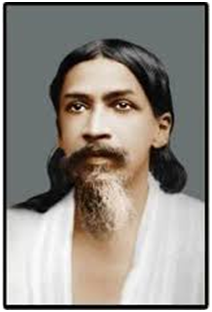 Aurobindo Ghose was a multifaceted person. He was a Freedom Fighter, Poet, Scholar, Yogi and Philosopher. He spent his life working towards the cause of India's freedom, and for further evolution of life on earth. Born on on August 15, 1872 to Krishna Dhun Ghose (Assistant Surgeon of Rangpur at that time) and Swarnalata Devi, Aurobindo Ghose had an impressive lineage. His maternal grandfather, Shri Raj Narayan Bose, was an acknowledged leader in Bengali literature. Aurobindo Ghose owes not only his rich spiritual nature, but also his very superior literary capacity to the impressive ancestral lineage.

When Sri Aurobindo was five years old, he was sent to Loretto Convent School at Darjeeling. Two years later in 1879, Aurobindo Ghosh, was sent to England along with his brothers for higher studies. In 1890, at the age of eighteen, Sri Aurobindo got admission into the Cambridge where he distinguished himself as a student of European classics. To comply with the wish of his father, Sri Aurobindo Ghose also applied for the ICS while studying at Cambridge. While he passed the Indian Civil Service Examination with great credit in 1890, Sri Aurobindo couldn't enter the Covenantal Service of the Indian Government for the reason of not qualifying the required test for horsemanship.

In 1893, Aurobindo Ghose, returned to India, and became the Vice-principal of the State college in Baroda. The Maharaja of Baroda held him in great respect. Aurobindo was an accomplished scholar in Greek and Latin. From 1893 to 1906 he extensively studied Sanskrit, Bengali literature, Philosophy and Political Science.

In 1906, in the wake of partition of Bengal, Aurobindo resigned from his job and joined the Bengal National College. He plunged headlong into the revolutionary movement. Aurobindo Ghose played a leading role in India's freedom struggle from 1908. He was one of the pioneers of political awakening in Indi and edited the English daily Bande Mataram and wrote fearless and pointed editorials. He openly advocated the boycott of British goods, British courts and everything British.

The famous Alipore Bomb Case proved to be a turning point in Sri Aurobindo Ghose's life. For a year Aurobindo was an under trial prisoner in solitary confinement in the Alipore Central Jail. He utilized this period of incarceration for an intense study and practice of the teachings of the Bhagavad Gita and had developed interest in yoga and meditation. Chittaranjan Das defended Sri Aurobindo, who was acquitted after a memorable trial. After his release he started practicing pranayama and meditation. Sri Aurobindo Ghose migrated from Calcutta to Pondicherry in 1910. At Pondicherry, he stayed at a friend's place. At first, he lived there with four or five companions. Gradually the number of members increased and an Ashram was founded.

In 1914 after four years of concentrated yoga at Pondicherry, Sri Aurobindo launched Arya, a 64 page monthly review. For the next six and a half years this became the vehicle for most of his most important writings, which appeared in serialised form. These included Essays on The Gita, The Secret of The Veda, Hymns to the Mystic Fire, The Upanishads, The Foundations of Indian Culture, War and Self-determination, The Human Cycle, The Ideal of Human Unity, and The Future Poetry. In 1926, Sri Aurobindo Ghose retired from public life

Sri Aurobindo philosophy is based on facts, experience and personal realisations and on having the vision of a seer or Rishi. Aurobindo's spirituality was inseparably united with reason. The goal of Sri Aurobindo was not merely the liberation of the individual from the chain that fetters him and realization of the self, but to work out the will of the Divine in the world, to effect a spiritual transformation and to bring down the divine nature and a divine life into the mental, vital and physical nature and life of humanity.

Sri Aurobindo passed away on December 5, 1950 at Pondicherry at the age of 78.
Copyright © 2017 - All Rights Reserved
Design and Developed by Bagwar Softwares Pvt. Ltd.